Cortex consists of multiple horizontally scalable microservices. Each microservice uses the most appropriate technique for horizontal scaling; most are stateless and can handle requests for any users while some (namely the ingesters) are semi-stateful and depend on consistent hashing. This document provides a basic overview of Cortex’s architecture.

The following diagram does not include all the Cortex services, but does represent a typical deployment topology. 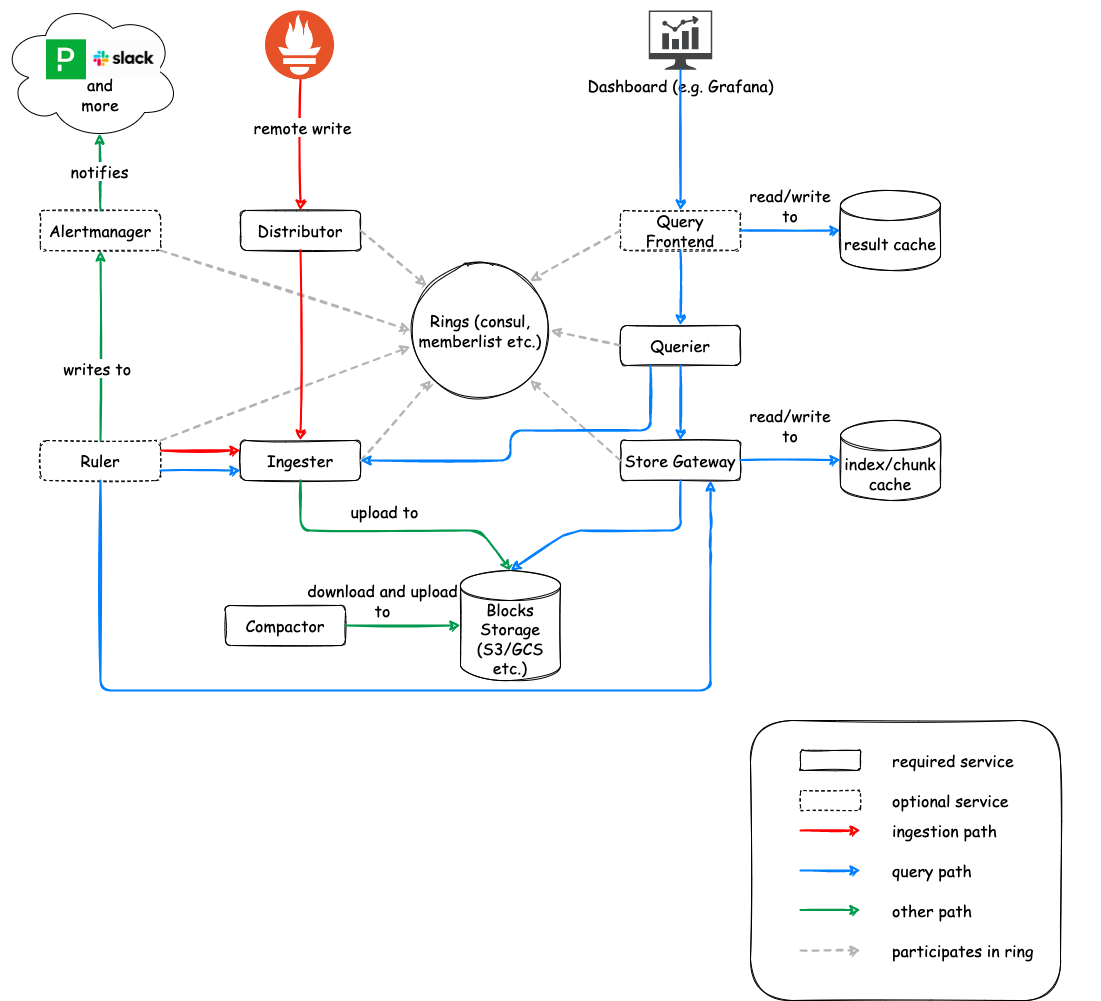 The role of Prometheus

Cortex requires that each HTTP request bear a header specifying a tenant ID for the request. Request authentication and authorization are handled by an external reverse proxy.

The blocks storage is based on Prometheus TSDB: it stores each tenant’s time series into their own TSDB which write out their series to a on-disk Block (defaults to 2h block range periods). Each Block is composed by a few files storing the chunks and the block index.

The TSDB chunk files contain the samples for multiple series. The series inside the Chunks are then indexed by a per-block index, which indexes metric names and labels to time series in the chunk files.

The blocks storage doesn’t require a dedicated storage backend for the index. The only requirement is an object store for the Block files, which can be:

For more information, please check out the Blocks storage documentation.

The Cortex services are:

The distributor service is responsible for handling incoming samples from Prometheus. It’s the first stop in the write path for series samples. Once the distributor receives samples from Prometheus, each sample is validated for correctness and to ensure that it is within the configured tenant limits, falling back to default ones in case limits have not been overridden for the specific tenant. Valid samples are then split into batches and sent to multiple ingesters in parallel.

The validation done by the distributor includes:

Distributors are stateless and can be scaled up and down as needed.

The HA Tracker deduplicates incoming samples based on a cluster and replica label. The cluster label uniquely identifies the cluster of redundant Prometheus servers for a given tenant, while the replica label uniquely identifies the replica within the Prometheus cluster. Incoming samples are considered duplicated (and thus dropped) if received by any replica which is not the current primary within a cluster.

The HA Tracker requires a key-value (KV) store to coordinate which replica is currently elected. The distributor will only accept samples from the current leader. Samples with one or no labels (of the replica and cluster) are accepted by default and never deduplicated.

The supported KV stores for the HA tracker are:

Note: Memberlist is not supported. Memberlist-based KV store propagates updates using gossip, which is very slow for HA purposes: result is that different distributors may see different Prometheus server as elected HA replica, which is definitely not desirable.

For more information, please refer to config for sending HA pairs data to Cortex in the documentation.

Distributors use consistent hashing, in conjunction with a configurable replication factor, to determine which ingester instance(s) should receive a given series.

The trade-off associated with the latter is that writes are more balanced across ingesters but each query needs to talk to all ingesters since a metric could be spread across multiple ingesters given different label sets.

A hash ring (stored in a key-value store) is used to achieve consistent hashing for the series sharding and replication across the ingesters. All ingesters register themselves into the hash ring with a set of tokens they own; each token is a random unsigned 32-bit number. Each incoming series is hashed in the distributor and then pushed to the ingester owning the tokens range for the series hash number plus N-1 subsequent ingesters in the ring, where N is the replication factor.

To do the hash lookup, distributors find the smallest appropriate token whose value is larger than the hash of the series. When the replication factor is larger than 1, the next subsequent tokens (clockwise in the ring) that belong to different ingesters will also be included in the result.

The supported KV stores for the hash ring are:

Since all distributors share access to the same hash ring, write requests can be sent to any distributor and you can setup a stateless load balancer in front of it.

To ensure consistent query results, Cortex uses Dynamo-style quorum consistency on reads and writes. This means that the distributor will wait for a positive response of at least one half plus one of the ingesters to send the sample to before successfully responding to the Prometheus write request.

We recommend randomly load balancing write requests across distributor instances. For example, if you’re running Cortex in a Kubernetes cluster, you could run the distributors as a Kubernetes Service.

The ingester service is responsible for writing incoming series to a long-term storage backend on the write path and returning in-memory series samples for queries on the read path.

Incoming series are not immediately written to the storage but kept in memory and periodically flushed to the storage (by default, 2 hours). For this reason, the queriers may need to fetch samples both from ingesters and long-term storage while executing a query on the read path.

Ingesters contain a lifecycler which manages the lifecycle of an ingester and stores the ingester state in the hash ring. Each ingester could be in one of the following states:

If an ingester process crashes or exits abruptly, all the in-memory series that have not yet been flushed to the long-term storage will be lost. There are two main ways to mitigate this failure mode:

The write-ahead log (WAL) is used to write to a persistent disk all incoming series samples until they’re flushed to the long-term storage. In the event of an ingester failure, a subsequent process restart will replay the WAL and recover the in-memory series samples.

Contrary to the sole replication and given the persistent disk data is not lost, in the event of multiple ingesters failure each ingester will recover the in-memory series samples from WAL upon subsequent restart. The replication is still recommended in order to ensure no temporary failures on the read path in the event of a single ingester failure.

Ingesters store recently received samples in-memory in order to perform write de-amplification. If the ingesters would immediately write received samples to the long-term storage, the system would be very difficult to scale due to the very high pressure on the storage. For this reason, the ingesters batch and compress samples in-memory and periodically flush them out to the storage.

Queriers fetch series samples both from the ingesters and long-term storage: the ingesters hold the in-memory series which have not yet been flushed to the long-term storage. Because of the replication factor, it is possible that the querier may receive duplicated samples; to resolve this, for a given time series the querier internally deduplicates samples with the same exact timestamp.

Queriers are stateless and can be scaled up and down as needed.

The compactor is a service which is responsible to:

The compactor is stateless.

The store gateway is the Cortex service responsible to query series from blocks, it needs to have an almost up-to-date view over the storage bucket. In order to discover blocks belonging to their shard. The store-gateway can keep the bucket view updated in to two different ways:

The store gateway is semi-stateful.

The query frontend internally performs some query adjustments and holds queries in an internal queue. In this setup, queriers act as workers which pull jobs from the queue, execute them, and return them to the query-frontend for aggregation. Queriers need to be configured with the query frontend address (via the -querier.frontend-address CLI flag) in order to allow them to connect to the query frontends.

Query frontends are stateless. However, due to how the internal queue works, it’s recommended to run a few query frontend replicas to reap the benefit of fair scheduling. Two replicas should suffice in most cases.

Flow of the query in the system when using query-frontend:

Query frontend can also be used with any Prometheus-API compatible service. In this mode Cortex can be used as an query accelerator with it’s caching and splitting features on other prometheus query engines like Thanos Querier or your own Prometheus server. Query frontend needs to be configured with downstream url address(via the -frontend.downstream-url CLI flag), which is the endpoint of the prometheus server intended to be connected with Cortex.

The query frontend queuing mechanism is used to:

The query frontend splits multi-day queries into multiple single-day queries, executing these queries in parallel on downstream queriers and stitching the results back together again. This prevents large (multi-day) queries from causing out of memory issues in a single querier and helps to execute them faster.

Query Scheduler is an optional service that moves the internal queue from query frontend into separate component. This enables independent scaling of query frontends and number of queues (query scheduler).

Flow of the query in the system changes when using query scheduler:

Query schedulers are stateless. It is recommended to run two replicas to make sure queries can still be serviced while one replica is restarting.

Ruler is semi-stateful and can be scaled horizontally. Running rules internally have state, as well as the ring the rulers initiate. However, if the rulers all fail and restart, Prometheus alert rules have a feature where an alert is restored and returned to a firing state if it would have been active in its for period. However, there would be gaps in the series generated by the recording rules.

The alertmanager is an optional service responsible for accepting alert notifications from the ruler, deduplicating and grouping them, and routing them to the correct notification channel, such as email, PagerDuty or OpsGenie.

The Cortex alertmanager is built on top of the Prometheus Alertmanager, adding multi-tenancy support. Like the ruler, the alertmanager requires a database storing the per-tenant configuration.

Alertmanager is semi-stateful. The Alertmanager persists information about silences and active alerts to its disk. If all of the alertmanager nodes failed simultaneously there would be a loss of data.

The configs API is an optional service managing the configuration of Rulers and Alertmanagers. It provides APIs to get/set/update the ruler and alertmanager configurations and store them into backend. Current supported backend are PostgreSQL and in-memory.