Cortex implements a ring structure to share information of registered pods for each service. The data stored and used by the ring need to be implemented via Codec interface. Currently, the only supported Codec to the ring is Desc. Desc is a proto.Message with a list of instances descriptions. It is used to store the data for each pod and saved on a supported KV store. Currently, Cortex supports memberlist, consul and etcd as KV stores. Memberlist works implementing a gossip protocol while consul and etcd are a KV store service.

The ring is used by different services using a different ring key to store and receive the values from the KV store. For example, ingester service uses the key “ingester” to save and load data from KV. As the saved data is a Desc struct only one key is used for all the information.

Each service using a single key to save and load information creates a concurrency issue when multiple pods are saving the same key. When using memberlist, the issue is mitigate as the information is owned by all pods and timestamp is used to confirm latest data. For consul and etcd, all pods compete to update the key at the same time causing an increase on latency and failures direct related to number of pods running. Cortex and etcd implementation use a version tag to make sure no data is being overridden causing the problem of write failures.

On a test running cortex with etcd, distributor was scaled to 300 pods and latency increase was noticed coming from etcd usage. We can also notice 5xx happening when etcd was running.

The proposal is separate the current Desc struct which contains a list of key value in multiple keys. Instead of saving one “ingester” key, the KV store will have “ingester-1”, “ingester-2” keys saved.

The proposal is to create an interface called MultiKey. The interface allows KV store to request the codec to split and join the values is separated keys.

The codec implementation will change to support multiple keys. Currently, the codec interface for KV store supports only Encode and Decode. New methods will be added which would be used only by the KV stores implementing the multi key functionality.

The new KV store will know the data being saved is a reference for multikey. It will use the FindDifference to know which keys need to be updated. The codec implementation for the new methods will use the JoinIds and SplitById to know how to separate the codec in multiple keys. The DecodeMultiKey will also use GetChildFactory to know how to decode the data stored in the kv store.

Example of CAS being used with multikey design: 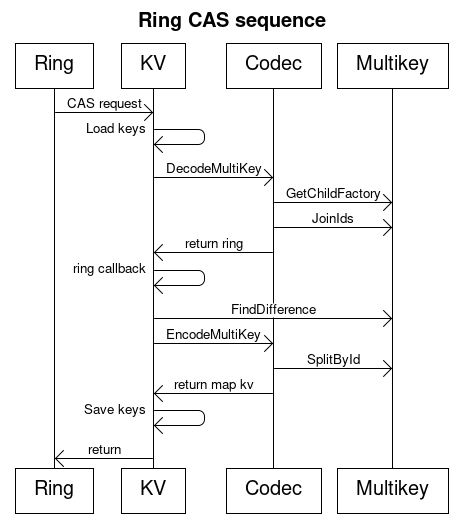